Irene worked as a musician in New York in its heyday, the 1970s and 80s.   The Irene Hartfield Trio played some well-known watering holes in Manhattan:  Jimmy Weston’s,  Jilly’s, 8th Street Gallery, Red Onion, Buddy Rich’s club, and the Grand Finale, being a few.  Her group also played at Caesar’s Palace in Las Vegas, Sneaky Pete’s in Hollywood, Florida, and The Summit Club in Caracas, Venezuela.

Irene also worked in the recording industry, both playing and singing, and played with some wonderful musician friends: Will Lee, Steve Gadd, Steve “Fonz” Gelfand, Arnie Wise, Jay Leonhardt, Stu Woods, and others.

For three years, Irene worked on Holland America cruise lines, sailing to Bermuda, the Caribbean and Brazil.  Irene also spent a summer playing a month each in three cities in Sweden, a highlight of her career. 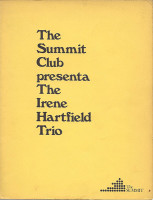 Program from the Summit Club in Caracas, Venezuela. 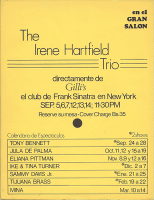 No shows booked at the moment.

Irene was phenomenal and Robin made me reconsider about drum solos. His was wonderful.

I love having you as my friend, you amaze me! Wonderful concert!

Knocked It out of the Park!

Last night Irene knocked it clear out of the park! She rode right into my heart at church about a year ago and I feel that my life here in Ely is better because of her beauty and talent. Thank you.